Augmentation of flat or sagging buttocks

What are the main issues that can affect the buttocks?

This concerns aspects such as flat or sagging buttocks.

What are the techniques that enable the volume of flat buttocks to be increased?

What are the techniques that enable sagging buttocks to be lifted (buttock ptosis)?

What are the causes of flat or sagging buttocks?

The origin is usually constitutional (insufficient development of the buttock muscles with the appearance of flat buttocks since puberty). Even with muscle strengthening through regular physical exercise, the buttock muscles can remain under-developed. The cause is sometimes secondary to significant weight loss, an illness or a neurological or muscular trauma.

There are several techniques for increasing the volume of the buttocks.

The buttock augmentation is performed using an autologous injection of fat, harvested using liposuction during the same surgical procedure. This concerns a graft of fat cells, the uptake of which is 50 to 70%.

The operation takes place at the Hôpital Privé Cannes Oxford

Duration of buttock surgery involving an injection of fat: 2 to 3 hours

Post-operative effects of buttock augmentation using an injection of fat:

The surgical procedure takes place at the Hôpital Privé Cannes Oxford in the operating room, in a sterile environment

The benefits of Macrolane in comparison to lipostructure

The disadvantages of Macrolane in comparison to lipostructure

A buttock augmentation may exceptionally be covered by health insurance when the buttock atrophy is secondary to an illness or neurological or muscular trauma. 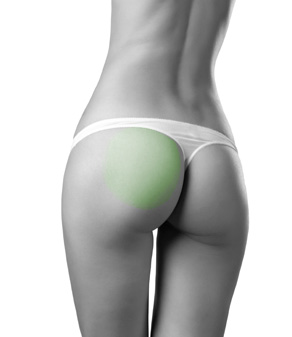