What is the definition of a total mastectomy?

What are the objectives of breast reconstruction following a total mastectomy due to breast cancer?

What is the average number of interventions required and period of time that must be left between each breast surgery procedure before the treatment plan is achieved?

What is autologous breast reconstruction surgery?

PHASE 1: RECONSTRUCTION OF A BREAST THAT HAS BEEN OPERATED ON

Breast reconstruction has the aim of providing the breast with a container (skin) and content (volume):

PHASE 2: SYMMETRISATION OF THE OPPOSITE BREAST

This second intervention takes place at least 6 months after the first one. Symmetrisation uses regular aesthetic surgery techniques which are adapted depending on the visual aspect of the opposite breast:

PHASE 3: RECONSTRUCTION OF THE AREOLA AND NIPPLE

This often concerns the final operation that concludes the breast reconstruction protocol.

The objective is to reconstruct the nipple area, texture of the areola and the pigmented colour of the areolar-nipple complex.

Reconstructing the texture of the areola:

A graft is taken from the inguinal fold, thus enabling the texture of the areola to be reconstructed. This is sometimes pigmented, which harmonises the colour between the two areolae.

Harmonisation of the colour of the nipples and the areolae:

The colour of the two areolae is harmonised using dermopigmentation (tattooing performed by a specialist dermographer).

A face lift is usually combined with other rejuvenation techniques to subtly enhance the result or maintain it: botox injections, hyaluronic acid injection, chemical peels, laser therapy and injection of fat. 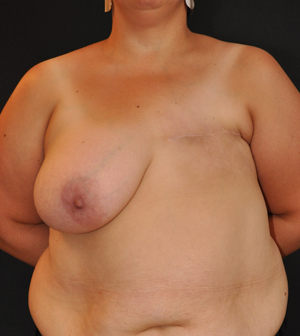