SURGERY FOR BREAST PTOSIS OR MASTOPEXY

Breast ptosis is defined by a subsidence of the gland and distension of the surrounding skin (sagging breasts). The breast is in too low a position and the upper breast is often "flat" or "empty".

Ptosis can be as of puberty (congenital ptosis of breast hypertrophies or of "mammary malformations": for example tuberous breasts). Breast ptosis occurs most often, however, after a large weight loss or during a pregnancy with lactation.

>There are basically 3 cases according to the volume of the breasts:

1. The volume of the breasts is pleasing: the procedure consists of a mastopexy (breast lift to elevate the breasts).

2.The volume of the breasts is insufficient: the procedure consists of a mastopexy combined with a breast augmentation using breast prostheses. For small ptoses (breasts that are beginning to sag) and when volume is insufficient, correction is possible by breast augmentation using breast prostheses without a mastopexy incision.

3.The volume of the breasts is excessive: in such cases of breast hypertrophy, the procedure consists of a breast reduction.

The choice of technique is assessed by your surgeon depending on your anatomical characteristics and your possible desire to also undergo a breast augmentation.

A breast lift for breast ptosis consists of reshaping the breast by acting on the skin pocket and the glandular tissue.
Breast remodelling: the gland is regrouped and placed in its correct position.
Concentration of the skin to elevate the breasts: next the skin pocket must be adapted, which involves removing the excess skin so as to ensure a nice, harmonious shape to the new breast.

The length of the scars will vary according to the degree of ptosis:

1. Severe ptosis: inverted T (or “anchor”) scar, that is to say periareolar, vertical and inframammary.

3. Minor degree of ptosis: periareolar or with no mastopexy scar if a breast augmentation using breast prostheses is considered

Oedema (swelling): 2 months
Ecchymosis (bruising): 7 to 15 days
A little pain, discomfort when raising the arms: 7 to 15 days
The vast majority of sutures are not visible as they are below the skin and are reabsorbable. Some sutures will require removing from each areola on the 15th day

The wearing of a brassiere: 6 weeks
Convalescence: 7 to 15 days
No driving: 7 days
No sport: 4 weeks

Visible shape after 3 months: immediately after the procedure, the upper breasts are deliberately very inflated and the lower breasts a little flat giving them a little natural look. They adopt their shape within 2 to 3 months.

Definitive shape after 1 year
Scarring is deemed definitive after 1 year
Problems of sensitivity of the breasts are common and temporary. They improve after 6 months to 1 year.

Only ptoses due to breast hypertrophy or malformation (tuberous breasts) are reimbursed by health insurance.

PHOTO OF THE RESULT: MASTOPEXY WITH INVERTED T INCISION
Grade III mammary ptosis. Maxtopexy without breast reduction to lift and remodel the breasts. 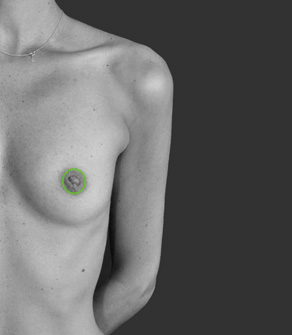 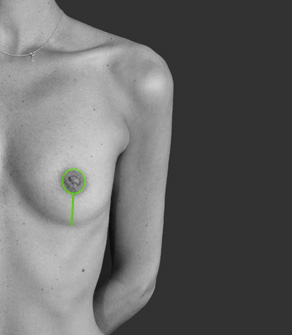 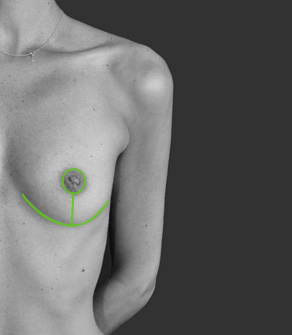 Consultations at the aesthetic surgeon's office in rue d'Antibes, Cannes